“Bloody hell,” I said again, looking out of the hotel window. We were alone, together. It had been almost three hours. We hadn’t heard anything of Sherlock Holmes except for what might have been a single gunshot blocks away at a little after one, or might have only been someone knocking over some bins. It was nearly three o clock now.

“Why don’t we go to bed?” said Lucy. “I didn’t really expect you to spend all night sitting in that chair.” 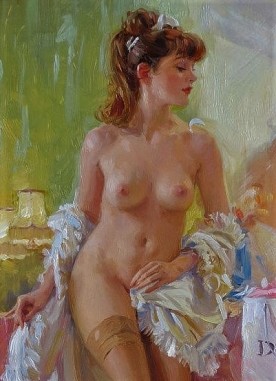 We went upstairs to where a guestroom had been prepared, and she disrobed. I must confess that the sight of her body, pale in the glow of a London streetlight through a the curtain, gave me pause.  In any case I must have stood there staring, because she said: “Now you.”

I complied, stumbling. The room was cold, like a girl’s skin is cold.

We got into bed.

Then the train was in the tunnel, and the double-decker was going down to Euston, the Thames was deep and wide and very wet. My hands reached up and found two perfect orbs, and my sceptre was gilded as my roaming finger tips felt for fixtures and found purchase there in the form of the metal poles pierced through either breast. Lucy’s body was the city, an entire map of London from the Elephant and Castle at her toes and up her Victoria Line to her Arsenal.

I was about to flip her over and learn some more local history when she pulled away.

For a moment I wondered about all the other men who had been inside her, like the feeling one sometimes gets from riding on a tube train. I felt bad. “I’m sorry. I didn’t mean to make you -”

“You didn’t make me do anything. I wanted to.” She said, as she felt the scars, on my back, from the old shrapnel wounds. “It’s been a while since I did it – you know – for any other reason than job.”

“Then I guess we’re both a little damaged.”

We lay there in each others arms for a while, exhausted.

This is a two-part story, to be concluded in A Study in Black

The full story will be published in a book version.

Back to the start